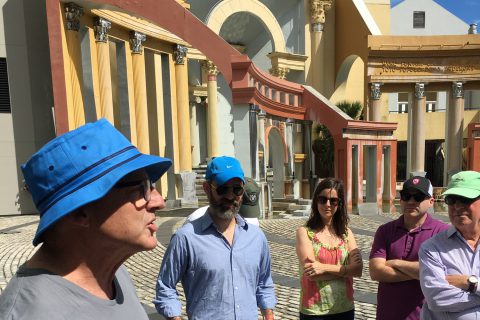 Board member Keith LeBlanc led a tour on April 1 of the Piazza D’Italia in New Orleans as part of the two-day What’s Out There Weekend organized by The Cultural Landscape Foundation.  Participants learned about how leaders of the Italian-American community sought to commemorate the Italian immigrant experience in New Orleans, which resulted in Piazza d ’Italia, an icon of post-modernism that opened in 1978. Architect Charles Moore collaborated with the Perez firm in a design that incorporated familiar Italian elements: colonnades, a clock tower, a campanile, a Roman temple, and, in homage to the Trevi Fountain, an extensive water feature. The full realization of the intended surroundings was never accomplished, though a restoration project is currently underway and the potential development of adjacent vacant lots is promising.